As a K-12 school dealing with students as young as five who, over the course of a week might use a dozen computers in different locations, we work hard to present a consistent experience from PC to PC. One way we do this is by redirecting the start menu to a network share, so every PC has the same start menu. This has worked great as far back as Windows 2000, but of course Windows 8/8.1 brought major changes to the OS, replacing the start menu with the start screen and tiles. While we are running Win 7 on the desktop, the Windows tablets we are beginning to roll out are of course, on 8.1, and we’re likely to be dealing with both versions for some time.

When the policies that redirect the start menu are applied to an 8.1 system you end up with an interesting result. The start screen will show the shortcuts from the redirect, along with the ‘default’ Metro shortcuts – and that’s all. Even the “Desktop” tile will be missing. That’s at least an easy enough fix, as detailed here; download the desktop shortcut and put it into your redirected start menu. Note that this shortcut is by default a system file; it seems in order for it to properly display you need to remove the system attribute; “attrib -s desktop.lnk” from a command prompt.

Now, probably the biggest start screen improvement from 8 to 8.1 from an administrator’s perspective is the ability to control the start screen via group policy. You can create a reference start screen, export it via PowerShell, then import it into group policy and push it back out to multiple computers through a GPO. We will probably do this eventually but right now our priority was getting a functional start screen that was reasonably consistent with the Windows 7 machines.

We ended up setting the following through group policy:

With these two settings in place, clicking Start brings up the “All Apps” view rather than the start screen tiles, and displays the desktop apps before any Metro apps. However, for that later setting to matter, you have to sort the “All Apps” view by Category.

This unfortunately is a setting that’s not natively exposed by Group Policy, but it is stored in the registry and thus can be controlled with a Group Policy Preference.

Between the earlier two GP settings and this registry entry (set to 3), we end up with the start button showing a list of all apps, with the shortcuts from our redirected start menu listed first. While this is still significantly different than a Win 7 desktop and its traditional start menu, I think this is the best solution for using a redirected start menu on Win 8.1. You can see below the similarities between the customized 8.1 app view and our redirected Win 7 start menu. The “Desktop” icon will show on the Win 7 start menu but doesn’t here because I hadn’t yet changed the shortcut’s system attribute as referenced earlier. 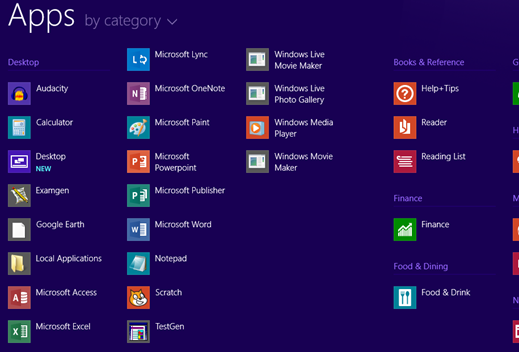 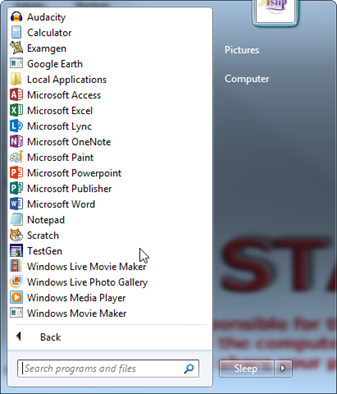 All in all these are an easy few tweaks to hopefully make 8.1 a little friendlier for those of you already redirecting the start menu.

3 comments on “Setting Windows 8.1 All Apps View Sorting via GPO”