One of the frustrations we’ve found with Office 365 is provisioning new AD users becomes a multi-step process:

In an environment where new users are infrequent this would be fine, but we’re K-12; students move into the district pretty regularly, so we’re always adding new users. And to complicate matters, the people creating these new users are outside of IT, thus they neither have permissions to administer O365 nor would they necessarily be able to do so reliably if they were given permission.

I wanted to automate this process as much as possible. You can administer Office 365 with PowerShell, so that’s the obvious (and AFAIK only) approach.

Before we get into the meat of this task, please review my post about how to determine what licenses are available to you, as you’ll need this info to modify the sample script I’ll provide later on.

We’re ultimately going to create a scheduled task to run a PowerShell script, so start by determining what server you want to run the task on. You’ll need to install:

Note that I setup this task on the same server I’m using for DirSync, so it’s possible there are other required components that were already present on my system.

To automate this process we’re going to need to store credentials that can administer Office 365. The easiest way I found to do this is from this blog post at BSonPoSH. The important thing here is you must log on to the server and run the below code with whatever account you intend to use to run the scheduled task. That’s because the credentials file created can only be decrypted by the user who created it. Update the path shown below if you need to.

When you run this you’ll be prompted to enter credentials that can administer your Office 365 tenant.

Here’s the actual licensing script; I’ll comment on it below.

You’ll need to change a few things to fit your environment:

So what’s the script actually doing?

You can run this script interactively to make sure everything is working. Once you’re comfortable that it is, setup a scheduled task to execute the script. The program executed should be powershell.exe at the path shown below. The argument should be the script itself, preceded by a “.\” – without this things will not work. Don’t ask why. Set the script’s directory in the “Start in” field. 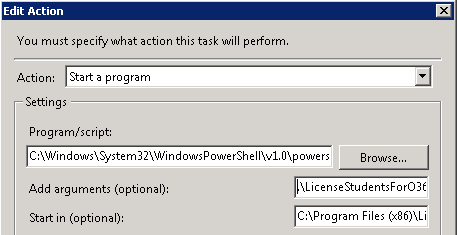 You can set the trigger to whatever you like, depending on when and how often you want this to run. The other critical piece is to run the task as the AD user under which you created the original cred.txt file. You may also need to check “Run with highest privileges.”

Since the user situation is a little confusing let me attempt to clarify it:

That should do it! This definitely requires a bit of work upfront but should making keeping up with new users much easier. If you find this useful or have any questions, please let me know.